Indonesia: several key industries have recovered and GDP should grow by more than 5% in 2022 and in 2023, but high inflation and other downside risks loom.

An economic rebound is underway and sectors have recovered, but downside risks persist 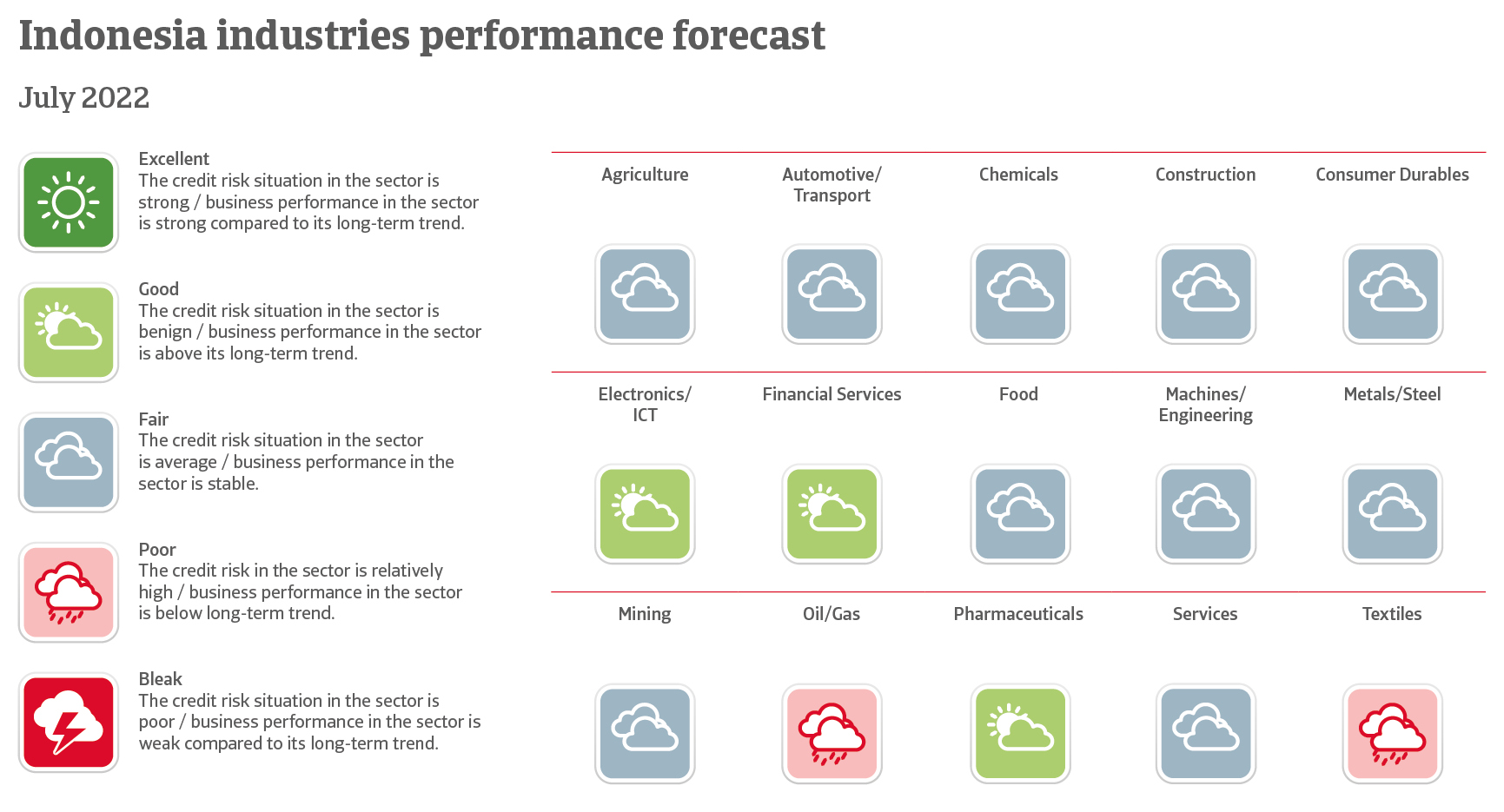 In his second term, President Joko Widodo has continued to tackle economic reforms, such as infrastructure improvement to support the manufacturing sector and digital economy, reforms of the labour market and foreign investment rules. However, some key elements of his policy agenda remain contested due to vested interests. While Widodo has broad support in the House of Representatives, the wide range of political groups in his cabinet makes decisive policy making difficult. Compromises on policies and on cabinet appointments should preserve the loose-knit coalition until the next presidential elections, due in February 2024. According to the constitution, the president can only stay in power for two terms, which means that Widodo will not be able to run again.

Lifting of lockdowns since end-of 2021

Compared to its neighbours, Indonesia’s government was late in taking comprehensive measures to contain the coronavirus spread in 2020 and 2021, most probably due to concerns over negative consequences for the economy. Only looser restrictions on social activities were implemented across the archipelago throughout 2020 and H1 of 2021.

In June and July 2021, coronavirus cases sharply increased, spiking at 55,000 new daily cases in mid-July. The country experienced among the highest rate of coronavirus cases in Southeast Asia. Finally, more restrictive lockdown measures were imposed in July 2021, in Java, Bali, and other parts of the country.

The lockdown measures have been lifted again end-of 2021 and in early 2022, and the pandemic has been largely contained since then. Vaccine rollout gained momentum in Q3 of 2021, with about 62% of the population fully vaccinated by end of June 2022. However, the rollout of booster doses will most probably be more protracted. It is expected that about 60% of the population will have received a booster by the end of 2023.

A solid economic rebound so far

In 2020, Indonesia’s GDP shrank 2.1%, a rather small contraction compared to many other countries. This was partly due to the fact that the Indonesian economy is rather closed (exports account for just about 20% of GDP, which makes the country less susceptible to global trade downturns than some other Southeast Asian countries).

The economy rebounded by 3.7% in 2021, mainly sustained by a 24% surge in exports, due to strong global commodity demand. While government consumption increased 4.2%, with a 2% growth private consumption recovery remained muted.

In Q1 of 2022, Indonesia´s GDP grew 5% year-on-year, driven by robust increases in household consumption, investment and exports. Household spending benefited from the lifting of pandemic-related restrictions and increasing vaccinations. Exports grew on the back of solid demand and surging prices of global commodities, such as coal, palm oil and nickel.

We expect the economy to grow by 5.7% annually in 2022 and 2023. This year we forecast private consumption and investments to increase by 6% and 7.5% respectively. Both were the main growth drivers in the years prior to the pandemic. Industrial production should grow by more than 6% and exports continue to increase, by 4.5%.

Consumer price inflation is an issue

Inflationary pressures have increased since early 2022. Triggered by the war in Ukraine, high global commodity prices for food and fuel remain an issue that could drive consumer prices in Indonesia further up, hurting households´ purchasing power. So far, the government has reacted by increasing subsidies on fuel and by intervening in cooking oil prices. In April/May 2022, it imposed an export ban on crude and refined palm oil products for three weeks after months of cooking oil shortage domestically. The scarcity had resulted in sharply increasing prices of the commodity, and had a major impact on overall food prices in the country. 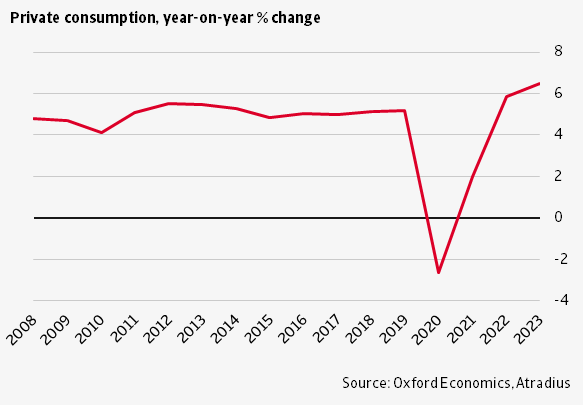 In order to sustain the economy during the pandemic, the Indonesian Central Bank lowered its benchmark interest rate by 150 basis points in total since early 2020, to 3.5%. However, in June inflation rose to 4.35% (3.55% in May), breaching Bank Indonesia’s target range of between 2% and 4%. Additional monthly consumer price increases are highly likely.

Therefore, we expect Bank Indonesia to increase the benchmark interest rate in the coming months. Another reason for rate hikes are concerns about the stability of the rupiah and capital outflows, after the US Federal Reserve has started to rise interest rates since March. The narrowing real interest-rate differentials between Indonesia and the US put downward pressure on the rupiah against the USD.

Fiscal measures to support the economy

The Indonesian government has removed the constitutional budget deficit cap of 3% of GDP for the 2020-2022 period and allocated large stimulus measures in order to support the economy at the height of the pandemic. Key measures to support the economy have so far included higher health care spending, social protection measures, corporate tax cuts, credit restructuring, special loans to SMEs, cash handouts to the poor and to workers in the informal sector (about 70 million out of Indonesia’s population of 270 million work in the informal sector), and expansion of public sector projects. 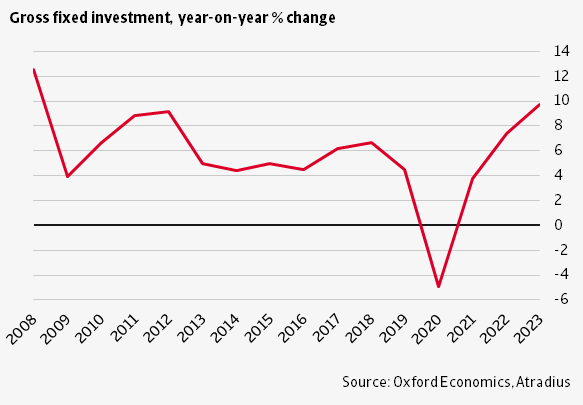 Upgrade of performance forecast for some key industries

As the economic rebound supports growth and recovery of certain key sectors, we have recently upgraded the business performance and credit risk situation of several industries. While we have upgraded ICT from “Fair” to “Poor”, Automotive, Metals/Steel, Mining and Services went up from “Poor” to “Fair” (see chart above).

ICT has performed well during the pandemic, as many businesses have accelerated their digital transformation projects. The sector has largely benefited from the surge in remote working and e-learning. Non-payments are low in the industry. We expect ICT output to grow by 8% annually in 2022 and in 2023.

Automotive benefits from tax incentives that have boosted car sales. Additionally consumers have started to invest again in vehicle parts like tires. We expect automotive output to grow by about 10% annually in 2022 and in 2023.

Metals and steel output should grow by more than 10% in 2022. Growth is mainly driven by strong demand from the construction industry, which is set to grow by about 12% this year. Both the government (infrastructure projects) and the private sector have resumed their building projects since H2 of 2021.

Mining revenues are driven by the current surge in commodity prices, which triggered further investment in the mineral extraction and processing segments. However, despite a recent sales price increase the performance of the coal-mining segment remains volatile.

Due to lockdown measures and travel restrictions many Indonesian service segments have suffered heavily, especially tourism-related ones like hotels, restau­rants, bars, entertainment and cultural events, travel agencies and tour operators. Hotel and catering output contracted 10% in 2020. With the lifting of restrictions and the rebound in tourism, this segment should grow by 8% annually in 2022 and in 2023.

There are downside risks to the ongoing rebound. Those are further rising prices for food and energy and ongoing supply chain disruptions triggered by the economic repercussions from the war in Ukraine. Other potential issues are a marked slowdown of the Chinese economy due to further lockdowns, which could hit commodity exports. Additionally, an excessive tightening of global monetary policy, in particular in the US, could have a negative impact on Indonesia´s economy and exchange rate.

The Indonesian foreign debt level in terms of GDP seems manageable (37% of GDP in 2022). Foreign debt in relation to exports of goods and services decreased from 216% in 2020 to 167% in 2021, due to robust export growth. However, Indonesia´s external position remains vulnerable, due to a high dependency on portfolio investments for financing its persistent current account deficits, rather low foreign assets, and the unfavourable creditor structure of foreign debt (almost 85% are private creditors). Foreign investors hold more than 30% of Indonesia’s government bonds, a larger share compared to the country´s regional peers.

This makes the economy susceptible to sharply decreasing capital flows to emerging markets, e.g. triggered by an even more aggressive monetary tightening in the US. In such a scenario, Indonesian companies that have borrowed in foreign currency without hedging the currency risk could have problems with their debt obligations, in particular if the rupiah were to sharply depreciate against the USD. Foreign investors hold about a third of corporate debt financing.

However, it must be said that Indonesia´s vulnerability to shifts in investor sentiment is mitigated by sound monetary policies, a resilient banking sector and the fact that a large part of public external debt is long term.

The 2022 edition of the Atradius Payment Practices Barometer for Asia reveals a sharp rise in B2B bad debts written off as uncollectable. This represents a threat of liquidity strains for businesses.